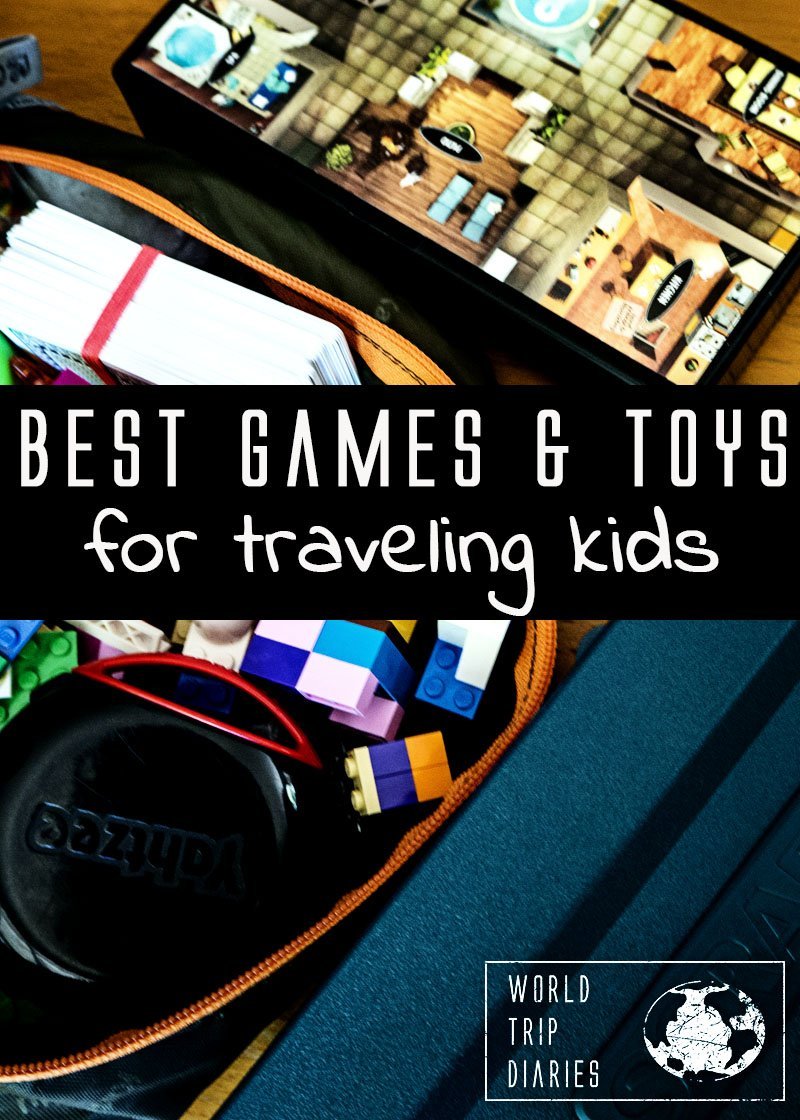 A pin to make the life easier!

I have 4 kids. We’ve been traveling for nearly a year and a half. We need the stuff to keep them entertained. We’ve tried quite a lot of things, and I feel very confident about writing this post now. Here’s the list of the best games and plays for traveling kids.

* This post contains affiliate links. If you buy something from them, it won’t cost you anything but we will receive a small commission.

The best games for traveling kids

For us, the games need to be small, lightweight, and easy to carry. Here’s a list of the best games in the world for kids!

It’s a classic, everyone’s played it before and the travel version is small and light, making it very travel-friendly. When you have 4 kids, it’s easy to get them playing without adults needing to be involved. If you don’t know what it is, I’ll tell you. It’s a detective game, where you need to find out the murderer, the weapon, and the location of the crime. It sounds creepy, but it actually isn’t. Click here to see the latest prices!

It can be used for playing solitaire, UNO, and any other card game in the world. Plus, to learn some coordination by shuffling, making pyramids, and doing magic tricks. There’s no end to the possibilities of one deck of regular cards! Click here to see them!

Another classic, easy and simple game for little kids to play along. It’s small enough to be carried, but it can also be played with regular cards – just trade the power cards for J, Q, K, A and Joker. We have the actual UNO set, but we’ll ditch it when the cards get damaged again. Check the latest prices here!

A great game, perfect for those learning to write, perfecting spelling, and improving vocabulary. The travel sized one is small and light, but there are alternative versions without the board. What we love about this travel version is that the letters stick to the board and you can close it and resume the game later. Perfect for when the train arrives, or something like that. Click here to find it on Amazon!

It’s a Brazilian writing game. Not fun for the ones who can’t write, but great fun for everyone else and it doesn’t need anything besides paper and pencil. What you do is choose a few categories (like color, fruit, animal, country) and start writing everything that starts with A. Aqua, Apple, Ant, Argentina. When you’re done, you say STOP and everyone put down their pencils. For each unique answer, you get 10 points. For an answer that’s the same as someone else’s (everybody wrote Aqua, for instance), you get 5 points and so do everyone else with the same answer. When you don’t do anything, it’s 0. When you were the only one who managed to answer something, you get 15 points. You add your points, write it down. When everyone’s done, the next letter starts. We usually do in alphabetical order as it’s easier, but you can even sort it with Scrabble letters, or each person chooses a letter, maybe even a dice. Whatever works. 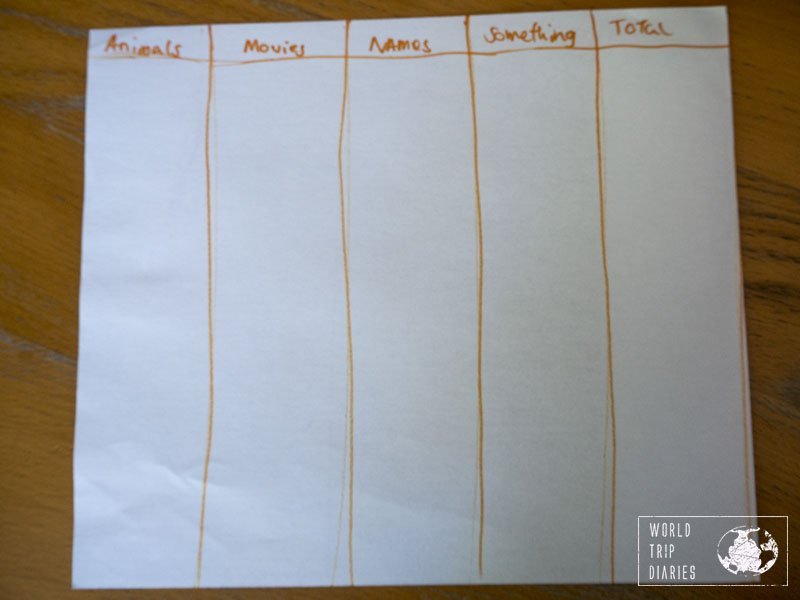 This is how our sheet of STOP begins. It surely is one of the games we love most, but kids do need to know how to write

It’s easy enough to make it on paper or to make a spreadsheet on the computer/tablet/phone, and play along without any pieces. Fun, and since it takes the time to make the sheets, it’s another skill learned and a little time for parents to do something. It’s also a great game to play in teams. They do sell the board version! Click to see it here!

Get a dotted sheet of paper, or even make symmetrical dots in a paper – lots of them. At least 20 x 20 dots. Then each person starts making a line from one dot to one of the neighboring dots. Each line cannot pass through lots of dots, and it can’t go diagonally. The goal here is to make little squares, so everyone who gets to put the line that closes a square gets to put their mark on it and make another line. When the paper’s done, everyone counts their squares and who gets the most, wins.

A pretty cool logic game. Too bad it was heavy as hell and we’d lost quite a few pieces. We trashed it a while ago. Still looking for a lighter version, as it was a great game for little kids and it can be made as challenging as necessary. Find it here!

A necessity. The kids read a lot, and it’s just because of the e-readers. They’re lightweight, small, and perfect. We love them. In doubt, get them an e-book as a gift! Find the prices of the e-readers here!

I bought this to exercise on the road. It’s still to be used for that. The kids, on the other hand, invent loads of games with them, and even use them when they’re playing as a prop, costume, or even to tie stuff up. They’re super light and occupy no space at all. Get your exercise bands here!

A great math game, we’ve been playing it for ages. It’s small and the sheets can be made digitally so you don’t even need to carry the paper. It’s easy to play with any dice, as long as you have 5 of them.

I’ve written about it before and I still love it. We use it as play dough, to stick stuff around, to make phone/camera holders (great for making stop motion or any kind of video, really), and they’re super small. We had to throw some away because they stick to hair, fur, dust, and whatever else there is on the surface you’re using, so know that it doesn’t last forever. It does, however, last for way longer than commercial play dough. Find some Blu-tac here!

Just hand them a package and see what they come out with. It usually takes around an hour for my kids to get bored of it. Sometimes they actually do origami, sometimes they just cut and make clothes or props for their plays, sometimes they use to make art, or draw, or just to find out if the colors on the paper work the same way as colored pencil. Grab some origami paper to entertain your kids here!

We traveled the first year without it but ended up buying a small pack and it’s nice to see them playing nicely with the very few pieces we have on hand. It’s a great toy with multiple ways to use. Ours is a simple one, just the ordinary pieces in varied colors, and it’s still great. It occupies very little space, so I’m guessing we’ll take them around. Buy your simple Lego pack here!

Then we have the classics, like Tic Tac Toe, Paper-Scissors-Rock, 20 Questions, Charades, and all the others that require very little, if anything at all. What’s your favorite way to keep the kids entertained – at least after all batteries have died?

We have the sheets for some of the games we made to play! Subscribe and gain access to them!

A guide to Montreal, Canada, with kids

A little guide to Quebec City, Canada, with kids
Scroll to top

Because these cookies are strictly necessary to deliver the website, you cannot refuse them without impacting how our site functions. You can block or delete them by changing your browser settings and force blocking all cookies on this website.

If you do not want that we track your visist to our site you can disable tracking in your browser here:

We also use different external services like Google Webfonts, Google Maps and external Video providers. Since these providers may collect personal data like your IP address we allow you to block them here. Please be aware that this might heavily reduce the functionality and appearance of our site. Changes will take effect once you reload the page.